Three Ingredient Raspberry Peach Nice Cream is easy to make and healthy to boot. Gluten free and vegan, it takes frozen bananas, raspberries, and peaches, and blends them up into a creamy frozen dessert. Your kids won’t even know they’re eating “just fruit”.

Nice cream is basically frozen bananas that have been blended into a mixture similar to the consistency of soft serve ice cream. It tastes very similar to ice cream, but without the dairy or added sugar.

Why is it Called Nice Cream?

Now that we’ve had a brief history lesson, on to the good stuff.

This is a really simple recipe, with essentially three steps. Add the frozen fruit to the blender. Blend until it’s all smooth. Scoop it out and eat it.

Of course there’s a little more to it than that.

If you’re not starting with frozen bananas (which this recipe assumes you’re not), you’ll need to peel them, slice them up, and freeze them. You’ll want to keep your bananas in the freezer until they’re frozen solid. This takes roughly 2 hours, though overnight is better.

Once all your fruit is frozen, dump it in your blender (or food processor) and start to blend. If you don’t have a great blender (which I don’t), this will take some effort on your part. You’ll need to use a spatula or wooden spoon (or other utensil) to scrape the sides down and keep the mixture blending.

Resist the urge to add a liquid to help the blending! It will make your raspberry peach nice cream thinner, which means less ice cream-like and more smoothie-like.

You’ll know when it’s done blending because it will look like the consistency of soft serve ice cream. See the picture below on the far right. That’s what it should look like.

You can also check out this post, with a video, from The Kitchn to see what it should look like with just bananas.

When it’s done blending you can either eat it right away (though it will be on the soft side), or stick it in the freezer for an hour or two to harden up a bit. Totally up to you.

Still need more dessert ideas? I get you, you’re my kind of people. Here you go:

A couple of last things to note:
1. You want to use very, very ripe bananas. As in, mostly brown on the outside. Of course you don’t want them to go rotten, but they should be over ripe.

2. If you want the nice cream to be more like the texture of regular ice cream (not soft serve), it will need at least an hour in the freezer, likely longer. I froze mine for two hours (in the blender cup because I’m lazy) and it still wasn’t quite as hard as I wanted. But I ate it because I was losing patience.

3. If you want more nice cream recipes, there are a bajillion resources out there. Some of the better ones I’ve found are at Pop Sugar and Chocolate Covered Kate.

If you’ve tried this Three Ingredient Raspberry Peach Nice Cream recipe (or any other recipe) then don’t forget to rate the recipe and let me know how it went in the comments below. Seriously, I love hearing from you!

You can also FOLLOW ME on FACEBOOK, INSTAGRAM and PINTEREST to see more good to eat, gluten free food and how I’m trying to get my kids into the kitchen more (without losing my mind). 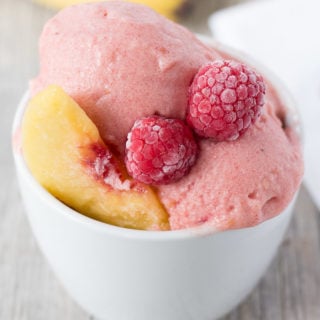 – Be sure and use over ripe bananas, ones that are quite brown on the outside but not rotten. The riper the bananas are, the sweeter the nice cream will be.
– The nice cream can be eaten right away, though it will be soft. Store in the freezer in a container to let harden.