This Simple Summer Berry Paleo Parfait is an easy dessert that is perfect for hot summer nights after you’ve enjoyed a good BBQ. Featuring a berry triple threat, the lemon makes it light and refreshing while the honey gives it a natural sweetness. Great for a dinner with friends or double it for a crowd. 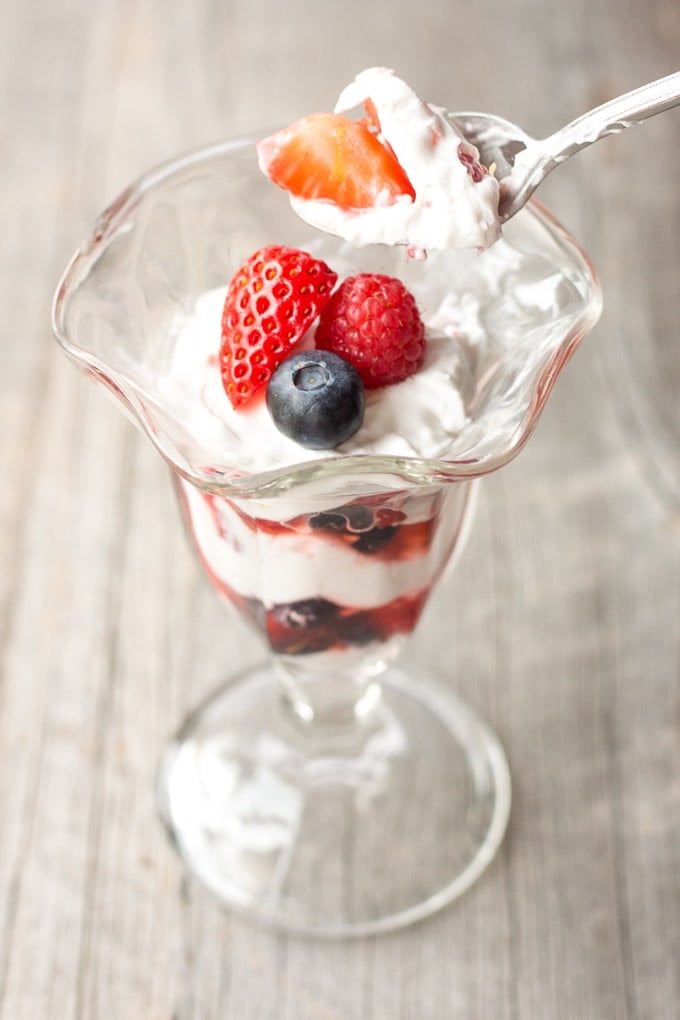 *THE FOLLOWING POST CONTAINS SOME AFFILIATE LINKS. I AM A PARTICIPANT IN THE AMAZON SERVICES LLC ASSOCIATES PROGRAM, AN AFFILIATE ADVERTISING PROGRAM DESIGNED TO PROVIDE A MEANS FOR ME TO EARN FEES BY LINKING TO AMAZON.COM AND AFFILIATED SITES. WHEN YOU CLICK THEM I RECEIVE A SMALL COMMISSION AT NO ADDITIONAL COST TO YOU. THANKS FOR SUPPORTING MY WORK AND MY FAMILY THIS WAY!

For this recipe I wanted to make something that was Paleo due to some diet restrictions in my extended family. I figure it’s not fair to make a dessert some people can’t have but everyone else can enjoy. For me that’d be a form of torture.

As berry season starts to come about in the Pacific Northwest, I also wanted to use something that was in season and would be great for upcoming BBQs. I started looking around and found some non-paleo versions, which I learned from to create this version.

And thus this Simple Summer Berry Paleo Parfait was born.

The first step to this recipe requires a little forethought. You have to put the can of regular coconut milk into the fridge the night before. You can probably get away with first thing in the morning if you’re making it in the later afternoon/early evening, but I would recommend at least 8 hours.

When you are ready to make the recipe, take out a medium sized bowl and put it in the fridge. I know that seems weird, but it will help keep the coconut cream cold when you’re whipping it, so it won’t melt as fast.

How to Make the Berry Mixture

Get your berries out and give them a good wash and dry. Hopefully you haven’t already washed your blueberries and raspberries as really they should be washed just before eating. Strawberries are okay to wash first and then put away. See, learn something new every day!

If you want to keep some berries as a garnish, now is the time to set them aside so they don’t accidentally end up in the bowl.

Take out your cutting board and a small sharp knife, then remove the stem on the strawberries and chop them up. They don’t need to be in too small of pieces, about half an inch will do. Then put them in a bowl with the other berries.

Now cut the lemon in half and spritz a teaspoon of lemon juice over the berries. Using a microplane or zester, scrape half a teaspoon of zest into the bowl.

Next get out the honey and put three tablespoons in the bowl with the berries. Mix everything together (you can just use the tablespoon you used to measure the honey).

If the berries (particularly the raspberries) get a little beat up, that’s ok. They will still taste delicious.

Now onto the coconut whipped cream.

How to Make Coconut Whipped Cream

This part may seem tricky, but it’s actually very easy. As long as you get the right brand of coconut milk.

There are variations in coconut milk that can make them difficult to whip into cream. I use Thai Kitchen coconut milk

(bought at Costco) and it works just fine. I have also heard good things about the Native Forest

brand. Dana over at Minimalist Baker used to use Trader Joe’s but they changed their formulation and it doesn’t work as well now.

Take your coconut milk out of the fridge. It should be solid at the top, as pictured on the left in the photo below.

You want to scrape off all the hardened cream and place it into the bowl that you had cooling in the fridge. Try not to get the liquidy milk part in the bowl. If a little bit gets in, it’s not the end of the word, but do your best.

Next take your hand mixer and start whipping the coconut cream (as picture in the photo above on the right). It will only take a minute or two to whip up, and the consistency should look about the same as whipped (dairy) cream.

Now to put everything together.

How to Assemble the Parfait

When starting to make the parfait, you can start with coconut cream or the berry mixture. I prefer the coconut cream as I think it looks nicer, and I like to let the berry juice sink down into the cream.

If you’re starting with the cream, place just enough for a small layer at the bottom (roughly one to two tablespoons). You don’t want to use too much in case you run out, so better to start out small.

See all these layers of goodness? 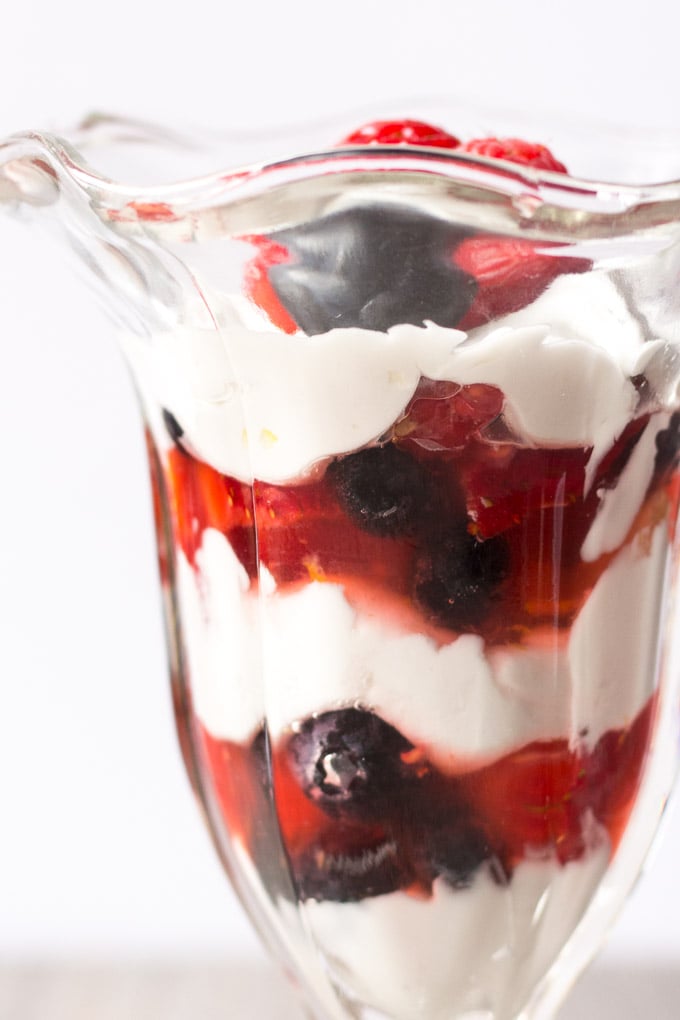 If you’re feeling fancy, you can use any reserved berries as a garnish for the top. I like to cut the strawberries in half and prop them up against a blueberry and raspberry, but you do you.

Now it’s time to scarf these bad boys down! 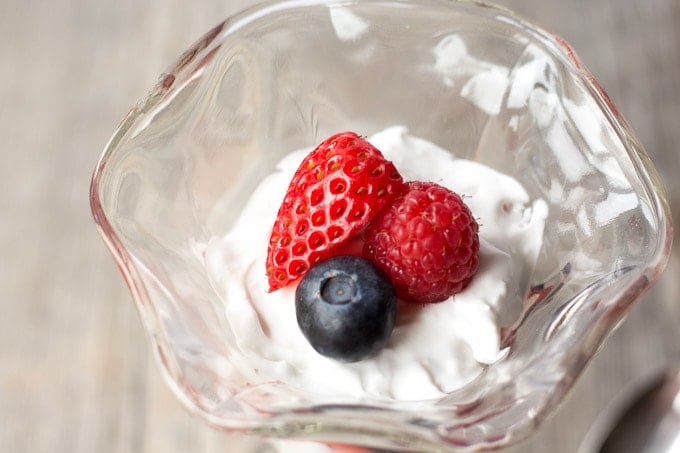 A couple last things to note about this recipe:
– This recipe can be made with regular whipping cream in place of the coconut cream if you can tolerate dairy. Use roughly half a cup of whipping cream to start with, or more if you have larger parfait glasses.
– The recipe calls for a “heaping” cup of strawberries. This means that you basically load as many strawberries as you can into a measuring cup, even if it’s overflowing a bit. To read more about a heaping cup vs a regular cup vs a rounded cup, check out good ole Wikipedia.
– You can make this dish ahead of time, but the coconut cream will harden in the fridge and lose much of its whipped texture. If you do decide to make it ahead of time, remove it from the fridge 20 to 30 minutes before serving so the crème can soften a bit. 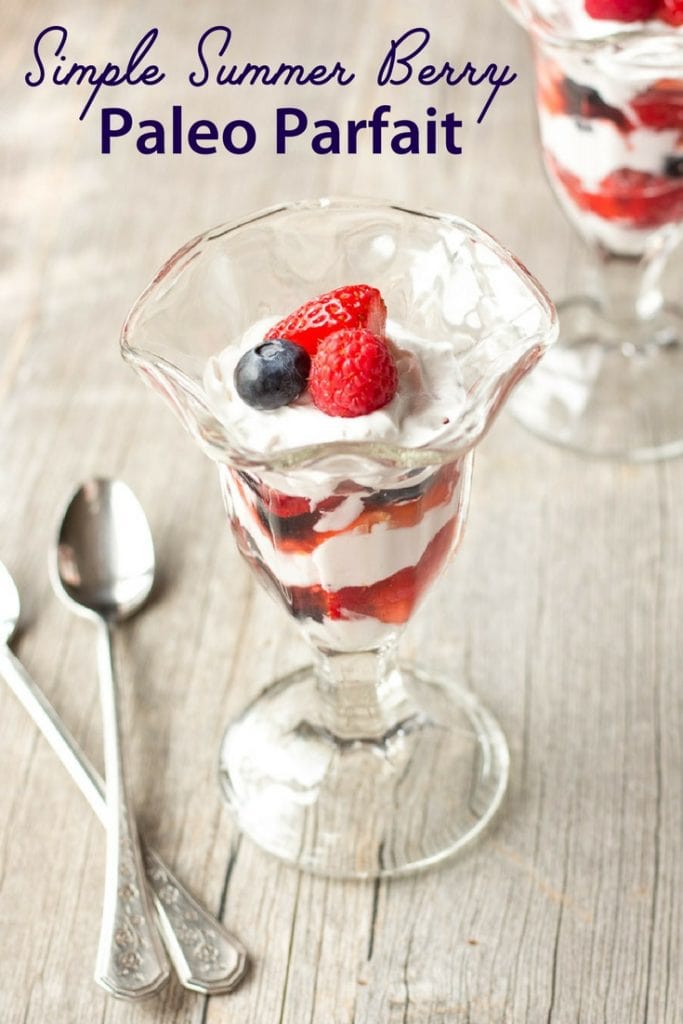 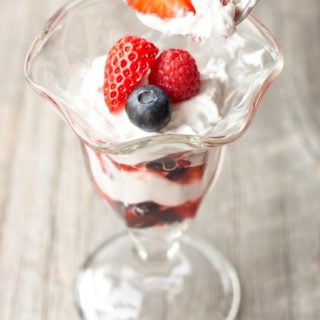 - Different brands of coconut milk can yield different results when making whipped coconut crème. I use the Thai Kitchen brand and have heard good things about the Native Forest brand.
- This recipe can be made with regular whipping cream in place of the coconut cream if you can tolerate dairy. Use roughly half a cup of whipping cream to start with, or more if you have larger parfait glasses.
- You can make this dish ahead of time, but the coconut crème will harden in the fridge and lose much of its whipped texture. If you do decide to make it ahead of time, remove it from the fridge 20 to 30 minutes before serving so the crème can soften a bit.