These Crustless Banana Cream Pie Cups have only 8 ingredients and are heaven in a cup. They have a smooth and creamy texture, with bites of banana added in. As always, they’re gluten free. Great for a fun dinner gathering, or double the recipe for a larger group. 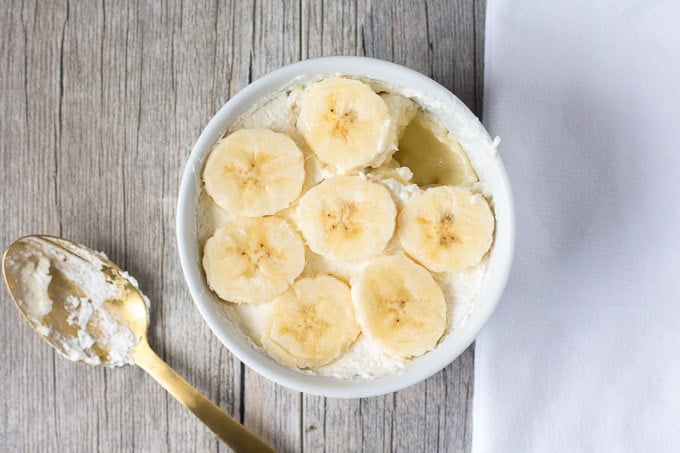 Banana cream pie is something I have fond memories of. Before anyone in my family was gluten-free, my mom would make it for a special occasion – someone’s birthday, Christmas, Easter.

If there were any leftovers they would get eaten for breakfast the next day. It tasted that good.
After going gluten and dairy free, my mom stopped making it. And I realized if I ever wanted to taste it again I had better make my own.

So here is a crustless, gluten free version of my mom’s banana cream pie, in a cup.

How To Make The Banana Cream Pie Filling

First separate three eggs, reserving the yolks in a bowl. You can keep the egg whites if you can find another use for them, but you won’t need them for the cream.

Next take out the ramekins you’re using. Peel the bananas and cut them into small coins, placing about half a banana in each ramekin.

Now onto the cream.

Pour the sugar and corn starch into a large sauce pan, then stir with a whisk to combine.

Gradually pour in the milk, stirring to make sure it incorporates. 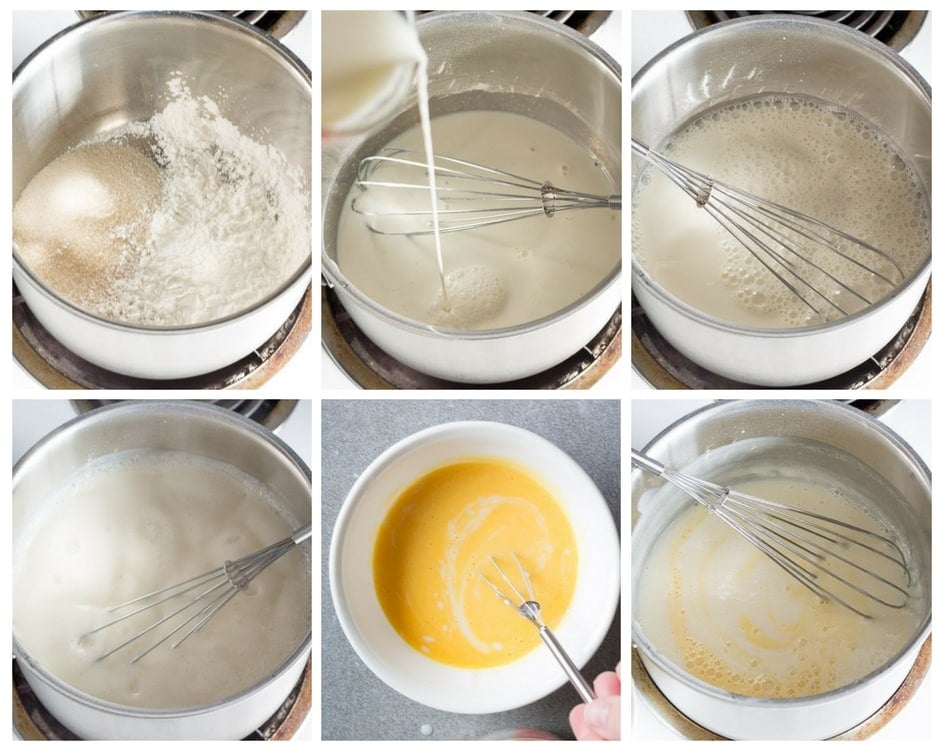 Now’s where you need to pay attention. Place the pan over medium-high heat and stir the mixture continuously until it starts to boil. It should look like the picture on the bottom-left in the collage above. Then keep stirring for 2 more minutes.

Now remove the pan from the burner.

Don’t pour the eggs straight into the pan! If you do, you will cook the eggs due to the high temperature of the mixture and wind up with little pieces of hard egg yolk. Which will be gross.

Once the eggs and milk mixture are combined, pour it into the large sauce pan.  Add in the vanilla and butter and mix everything together until it’s all incorporated.

How To Fill The Pie Cups

Next you want to grab the ramekins filled with banana slices and pour the milk mixture over the bananas.

If any bananas are poking up, just use a utensil (or your finger) to push it down so the surface is flat (as pictured in the middle picture above).

Using plastic wrap, cover each ramekin making sure that the plastic wrap touches the whole surface of the pie cup filling. Otherwise the filling will develop a rubbery layer on top, which tastes as you’d expect – rubbery.

Now you can place the ramekins into the fridge to cool and firm up. I like to leave them in overnight, but 3 or 4 hours will be fine.

If you’re short on time, you can place them in the freezer for about an hour, then pop them in the fridge until you’re ready to serve them.

How To Prepare The Topping

You want to top the dessert just before you’re ready to serve it.

Measure out half a cup of whipped cream, pour it into a medium bowl and whip it up with a hand mixer.

There are a number of tutorials on how to do this, so I won’t attempt to explain. Instead here are some video links to check out:
Real Simple
Food Network
The Kitchn

One note – the recipe doesn’t call for anything in the whipped cream (like sugar or vanilla). This is because the filling is very sweet and the plain whipped cream helps offset that.

How To Top The Pie Cups

You can pile the whipped cream on top of the pie cups any way you like.

Place a dollap on top, spread it out in an even layer and place sliced bananas on top, or even put it in a piping bag and make fun shapes (though you’ll need to whip the cream until it’s fairly stiff to do this). 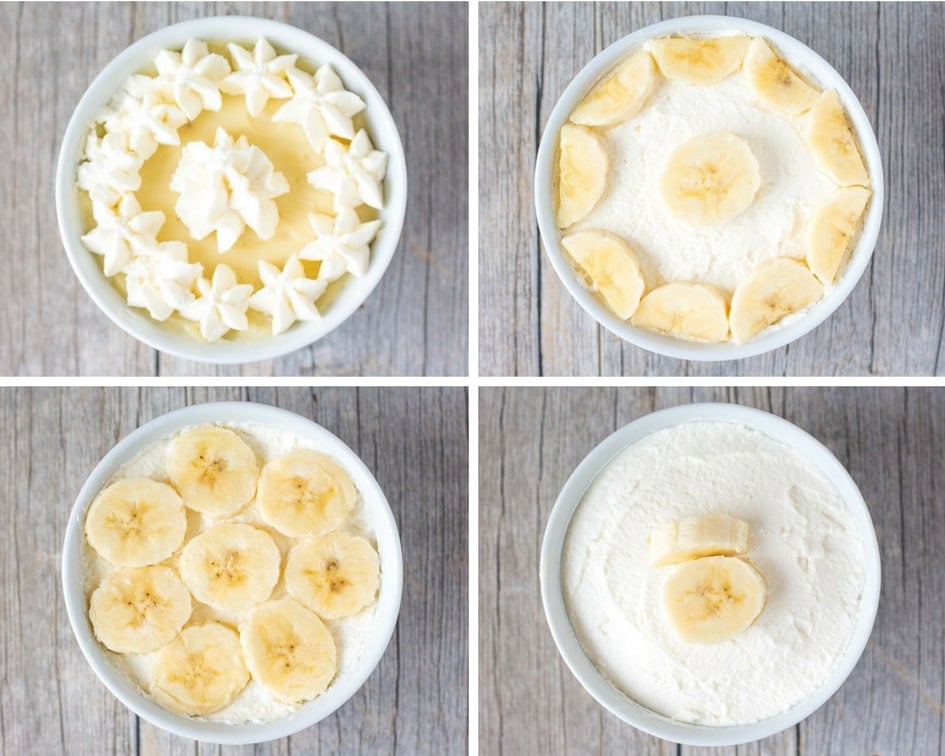 Then serve and enjoy!

If you’re looking for more dessert recipes, then check these out:

Now two last things to note about this recipe.

1) It is rich. Very rich. The recipe calls for 4 servings, but even at a roughly 1 cup serving size it’s a pretty large serving. You could easily make it into 6 servings by slicing up three bananas into 6 ramekins, then pouring the milk mixture into all six cups. You might have some banana peaking through, but just cover it with whipped cream, and

2) When you’re mixing the filling in the pan, be sure and scrape the bottom. Otherwise – you guessed it – the mixture will burn and you’ll get those brown flecks I talked about before. Edible but gross.

If you’ve tried this Crustless Banana Cream Pie Cup recipe (or any other recipe) then don’t forget to rate the recipe and let me know how it went in the comments below. Seriously, I love hearing from you! 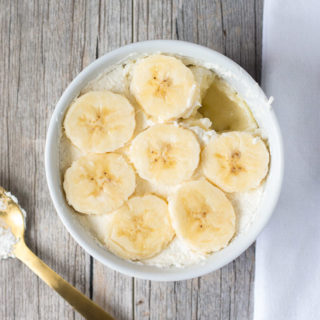 - This dessert is very rich and while the portion size isn’t that huge (about 1 cup), you could easily split the mixture into six ramekins instead of four. If you do so, you may want to use 3 bananas and still put half a banana in each ramekin.
- When you’re stirring the milk mixture as it’s boiling, be sure to scrape the bottom of the pan as you go. If you don’t, there will be bits of burned mixture and you will get brown flecks. They’re edible, but will throw off the texture and creaminess of the dessert.
Previous Post: « Gluten Free Slow Cooker Chili
Next Post: Simple Whole30 Guacamole »