This Thai Loaded Sweet Potato recipe is a quick meal when you’re running low on options. It has five main ingredients, one of which is rotisserie chicken to make things super easy. It’s also paleo and Whole30, so is a healthy dinner option when you’re craving Thai food. Put it on your dinner menu and see for yourself! 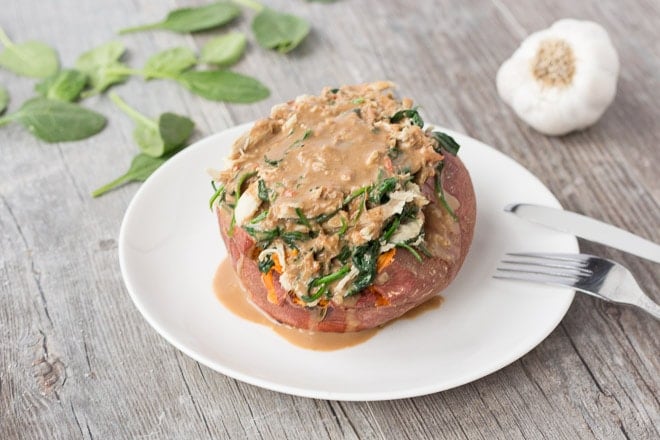 Sometimes you just crave Thai food, and nothing else will do. But what do you do when you’re on a Whole30? Make this Thai Loaded Sweet Potato, that’s what.

I was really wanting some Thai food, but I’m in the middle of a Whole30 and finding compliant Thai food in a restaurant was not a task I wanted to take on. So instead I thought about which dish I was craving the most.  Swimming Rama came to the top of the list.

Normally Swimming Rama is made with peanut sauce, which of course is a no go on a Whole30. There are a bunch of peanut sauce-like recipes out there, but one of my hands down favorites is Mel Joulwan’s Sunshine Sauce. It’s tangy and creamy and just really delicious. But, I understand that sometime you’re in a hurry and just want something prepared. For those of you in that situation, you can use Yai’s Thai Almond Sauce. It’s Whole30 approved and also very delicious.

Really this dish couldn’t be easier, which makes it great for a weeknight. You cook the sweet potatoes in the microwave, throw the spinach and leftover chicken in a pan with some oil and garlic, combine everything and pour some sauce over it, and boom, you’re done.

If you’ve never cooked a potato in a microwave before, it will change your life. So simple and great for a quick dinner. Feeling like you need more details? Here’s a step by step instruction on how to cook sweet potatoes in the microwave.

What’s really great about this dish is that the sweet potato takes over for some of the sweetness that’s missing with a typical peanut sauce. Except it’s not cloying and you’re actually getting vitamins from the potato instead of just sugar that’s in some pre-made peanut sauces. Win-win.

So next time you’re craving Thai for dinner, particularly if you’re on a Whole30, try this recipe out. And stop longing for compliant Thai food. 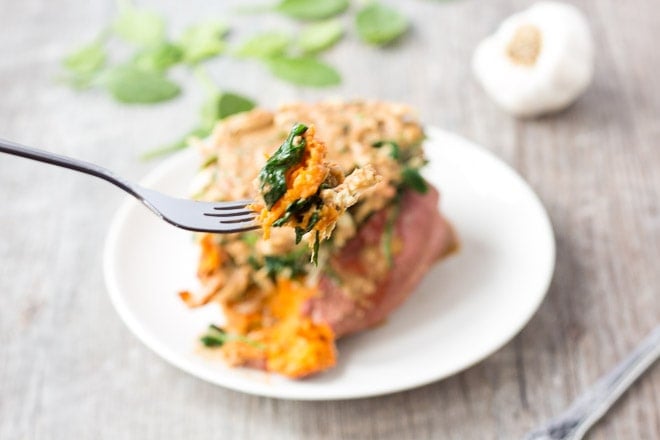 Looking for more easy Whole30 recipes? Check these out!

If you try this Swimming Rama Loaded Sweet Potato recipe (or any other recipe) then don’t forget to rate the recipe and let me know how it went in the comments below. It totally makes my day to hear how a recipe worked out for you. 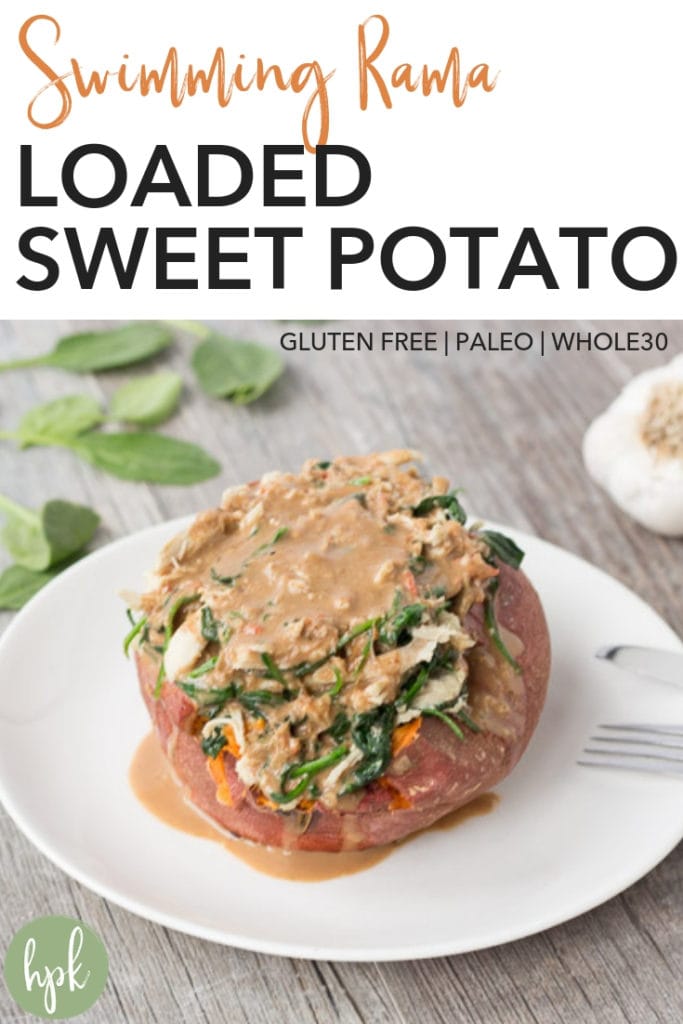 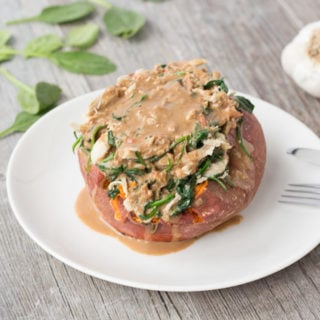 This Thai Loaded Sweet Potato recipe is a quick meal when you're running low on options. It has five main ingredients, one of which is rotisserie chicken to make things super easy. It's also paleo and Whole30, so is a healthy dinner option when you're craving Thai food. Put it on your dinner menu and see for yourself!
Print Pin Share by Email Rate
Course: Main Course
Cuisine: Thai
Prep Time: 5 minutes
Cook Time: 20 minutes
Total Time: 20 minutes
Servings: 2 servings
Calories: 702kcal
Author: Taryn Solie

*Notes:
- This recipe can easily be scaled down to 1 person, or up to however many you need.
- You can buy your own sauce or make your own sauce. If you want to make it, one of the best sauces I've had is Mel Joulwan's Sunshine Sauce: http://meljoulwan.com/2009/07/21/sunshine-sauce/