This Gluten Free Apple Crisp recipe is an easy fall dessert made in one bowl. It’s baked to perfection with a crunchy topping made of oats, almond flour, cinnamon, butter, and maple syrup. Eat it after dinner then save the leftovers for breakfast!

Once fall comes around and the apples start rolling in, it’s definitely time for apple crisp. While I love most desserts, crisps and crumbles tend to be my favorites. Especially if there’s a scoop of ice cream on top.

When recipe testing this apple crisp I tried different methods and kept getting results that just weren’t what I wanted. Finally, I figured out that pre-baking the apples is key – it helps soften them up.

What makes this the best gluten free apple crisp

I’ve written condensed directions here including pictures so you can see how to make this recipe. The full set of detailed instructions are in the recipe card at the bottom of the page.

Before you scroll through, there is important information throughout this post.

Check out these answers to commonly asked questions about gluten-free apple crisp.

What apples are best for apple crisp?

The apples that are best for apple crisp are those that will hold their shape a bit when cooked. Fuji, Golden Delicious, Honeycrisp, and Granny Smith are all good apples for baking that hold their shape when they’re cooked.

Do you need to peel apples for apple crisp?

No, you do not need to peel apples for apple crisp.

Can apple crisp be made ahead of time?

I wouldn’t recommend making apple crisp ahead of time, but you can be prep the apples ahead of time. Slice the apples and spritz them with a tablespoon or two of lemon juice to keep them from browning, then cover and put them in the fridge. Prep the rest of the recipe just before cooking to avoid the topping getting soggy.

Do you need to refrigerate apple crisp?

Since it has butter in it, yes, you need to refrigerate apple crisp. Wait until it has fully cooled, then cover it with plastic wrap or store it in an airtight container in the fridge.

How do you reheat apple crisp?

While you can definitely reheat it in the microwave, the topping won’t be crunchy. The best way to reheat apple crisp if you want a crunchy topping is to do it in the oven. Turn the oven to 350 degrees F and once it comes to temperature, put the apple crisp dish in and heat for roughly 10 minutes, until it’s warmed to your liking.

Save this easy gluten free apple crisp recipe to Pinterest

IF YOU’RE LOOKING FOR MORE GLUTEN FREE DESSERT RECIPES, CHECK THESE OUT!

Or if you’d like another gluten free apple recipe, try one of these:

If you try this Gluten Free Apple Crisp recipe (or any other recipe) then don’t forget to rate the recipe and let me know how it went in the comments below! 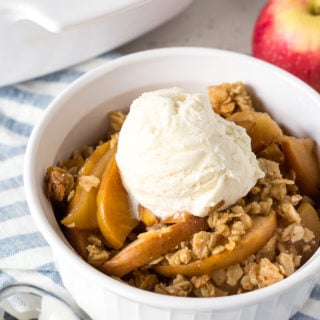