This Gluten Free Instant Pot Potato Salad is an easy recipe to make for a crowd. It uses celery and shallots for a little crunch and may with mustard and vinegar for a little kick. Put is some cut up hard boiled eggs and a dash of paprika on top and you’ve got a winner. 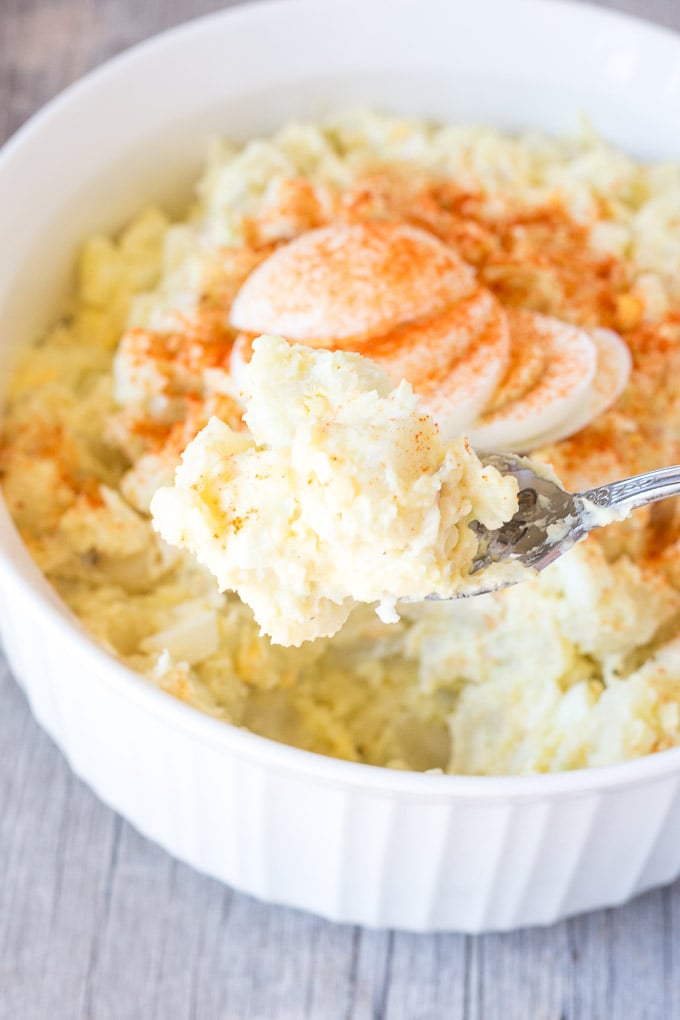 The first step of the recipe is to peel and cut up the potatoes. But before you do that, you may be asking…

What is the Best Potato for Potato Salad?

My first inclination was to use baby red potatoes, as I think they’re cute and like the red color in the potato salad (such a good reason to cook with something, I know). There are several sites that will tell you a denser, waxier potato is best for potato salad (like The Kitchn) because it holds it’s shape better. However I like the potatoes to be a little on the smushed side. And according to All Recipes and Serious Eats, russets do this well and also really let the dressing soak in. So I went with russets for this recipe.

Now to get cracking on making this Gluten Free Instant Pot Potato Salad.

How to Cut a Potato for Potato Salad

I can usually get away with making three long cuts, then chopping those up into smaller pieces. The pieces tend to be kind of rectangular, but they can be cut up a bit more once you’re mixing everything together if they’re too big for you.

Next up, cooking the potatoes and eggs in the Instant Pot.

How to Cook Potatoes and Eggs in an Instant Pot

These steps are for the Instant Pot, as that is the pressure cooker I have and what seems to be most popular at the moment. This method should also work in other types of pressure cookers, though you may need to adjust the cooking time by a minute or two.

First you’ll put the steamer basket into the pressure cooker insert. I use a green silicone one by OXO that works well, but they also have a metal one that does the job too.

Next, pile all the potatoes in the basket, then nestle the eggs on top of the potatoes. If you’re using a steamer basket with handles do your best to get the handles out of the way or tucked away when you put on and seal the lid.

Make sure the lid is sealed and that the pressure release knob at the top is set to “sealing” and not “venting”. Otherwise the pressure cooker won’t get up to pressure and you’ll wind up with undercooked potatoes and eggs. Which would just be gross.

Set the timer for 4 minutes, then take out a medium-sized bowl and put about a cup of ice and some cold water in it. This will be for the eggs once they’re done cooking.

Next up you’re start to assemble the potato salad.

How to Make Potato Salad

While the pressure cooking is taking care of the eggs and potatoes, roughly cut up the celery and shallot using a sharp knife and cutting board. Place the pieces into a food processor (I like to use my mini food processor) and start mincing it up. I like mine in a very fine mince, but if you prefer larger chunks in your potato salad you can stop before the pieces get too small. 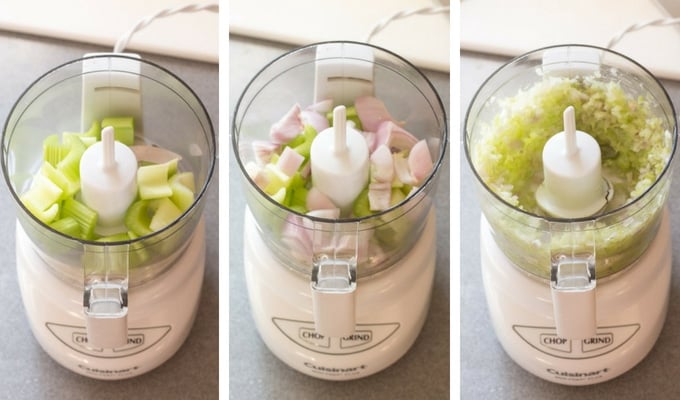 Now to move on to the dressing. Grab a large bowl (even better if you can store and/or serve the potato salad in the bowl) and dump the following into it:

Mix it all together with a spoon to combine (as in the second picture from the right). 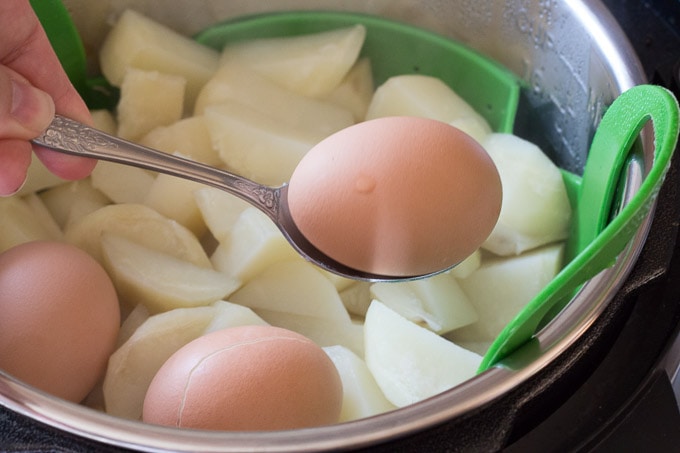 Let the eggs sit in the ice bath for 5 or so minutes to cool down.

Grab a oven mitt or hot pad and take out the steamer basket with the potatoes. Dump the potatoes into the bowl with the dressing and stir everything together.

Once the eggs have cooled, peel them and get ready to get a lesson in egg dicing (which I know sounds super exiting). You’ll only dice 4 of the eggs. Leave the fifth for a fun garnish.

How to Dice an Egg

These instructions are for dicing an egg in your hand, which I’ve found to be easiest. If you try to do it on a cutting board the egg falls apart too easily and then it’s just a big ol’ mess.

You do have to be very careful with this method though, so as not to slice your hand. Don’t drag the knife across your hand. This is how it should be done:

Now you mix everything together and you’re almost done with your Gluten Free Instant Pot Potato Salad.

The last step is to garnish the dish. Sprinkle a couple dashes or paprika on the salad (this is optional but provides a nice contrast). Slice the last egg three or four times length-wise, then fan the slices out a bit and set them on top of the salad. Voila! 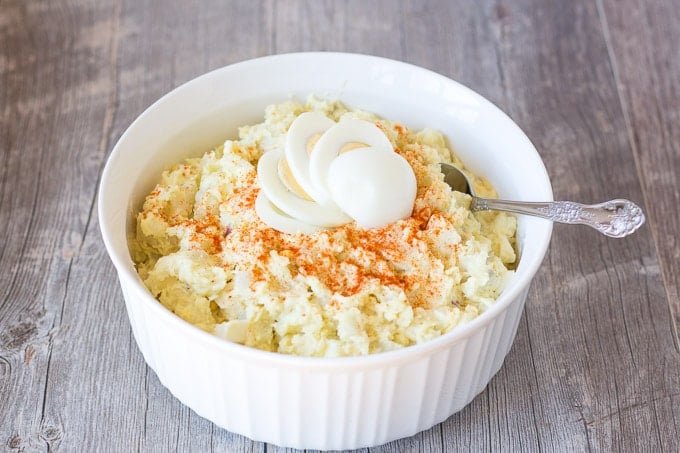 You can serve it on the warm side if you want, though I prefer it cold. Store it in the refrigerator and serve once it’s cooled down. This is great to make the morning of (or even the night before), then bring out for an evening BBQ.
Looking for more fun summer dishes? Check out the following:
Simple Summer Berry Paleo Parfait
Cashew Grape Chicken Salad
Crustless Banana Cream Pie Cups
Citrusy Simple Guacamole 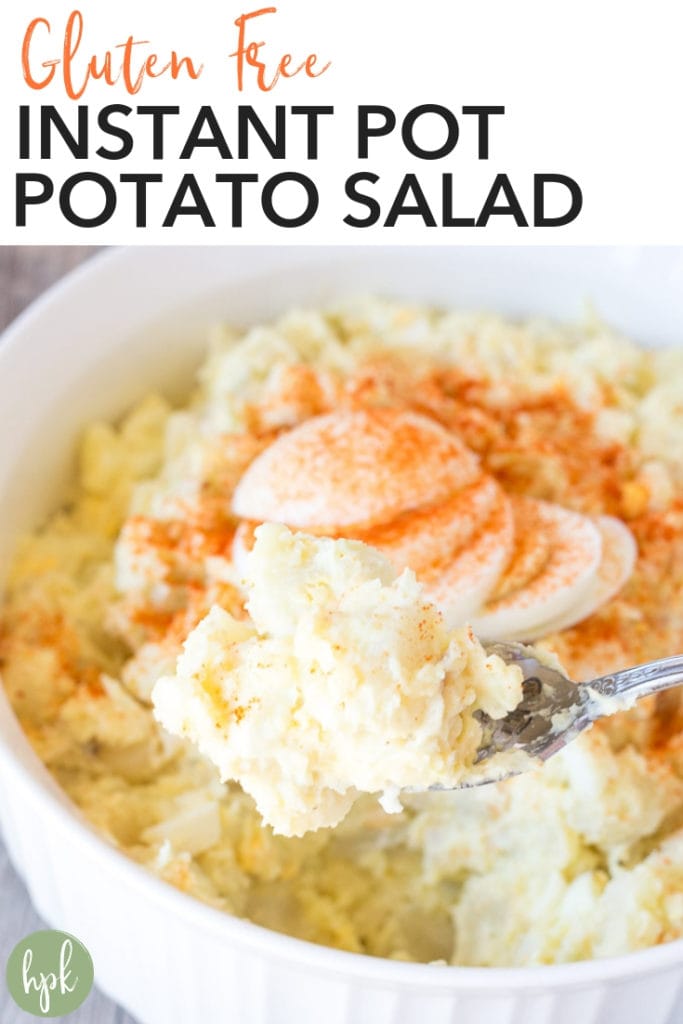 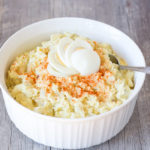 This Gluten Free Instant Pot Potato Salad is an easy recipe to make for a crowd. It uses celery and shallots for a little crunch and may with mustard and vinegar for a little kick. Put is some cut up hard boiled eggs and a dash of paprika on top and you've got a winner.
Course Side Dish
Cuisine American
Keyword gluten free, instant pot, potato salad
Prep Time 27 minutes
Cook Time 8 minutes
Total Time 35 minutes
Servings 12
Calories 240kcal
Author Taryn Solie