Need a simple recipe to incorporate into your weeknight dinners? These Cheesy Chicken Enchiladas are gluten free and easy to put together, using rotisserie chicken to cut down on cooking time. The filling has cooked down onion and green chilis to add a little kick of flavor but they’re still mild enough for kids. Try them out and see for yourself! 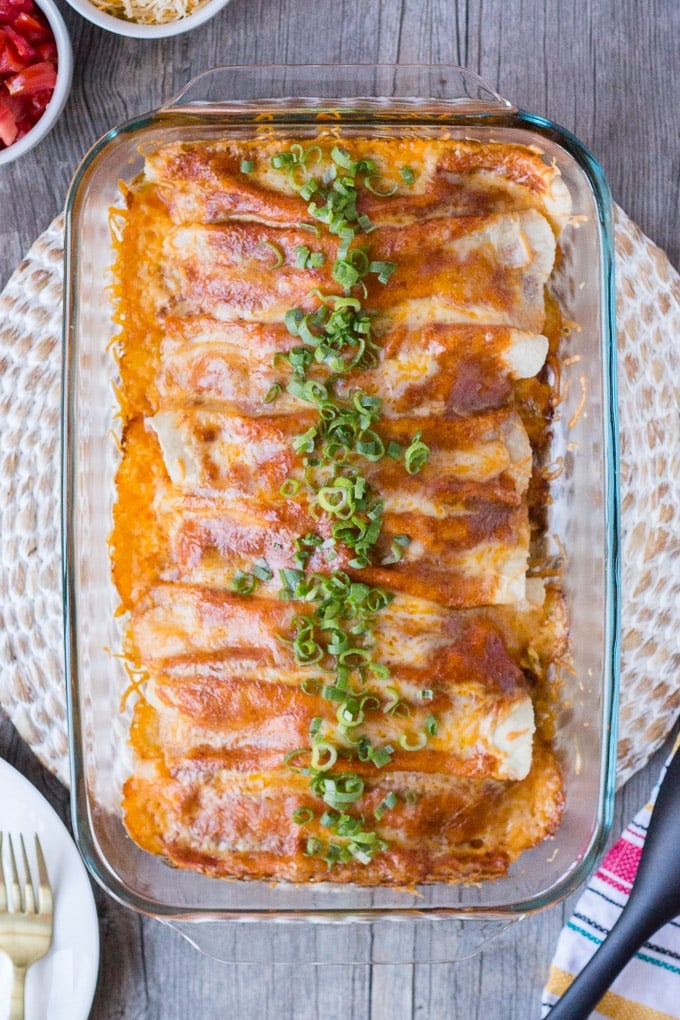 When fall starts to come around, I start craving comfort foods. Which usually means a filling meal that has cheese and carbs. I don’t have enchiladas as much as I used to since going gluten free, but a craving hit me one day and I had to recreate a gluten free version to satisfy it.

I found this recipe by Iowa Girl Eats, which looks delicious, but it required making my own sauce. While I’m sure it tastes delicious, I’d rather just use a pre-made version. The Frontera Mild Enchilada Sauce is a favorite in our house, but if you have a different favorite that’s gluten free use what you like.

Now let’s get on to the important part – the recipe.

How to Make the Filling for Cheesy Chicken Enchiladas

First you’ll dice the onion. If you have kids that will be eating this that aren’t into onions, I would mince them or even use a food processor to get them into a fine cut.

Grab a large non-stick pan and place it over medium heat. Add a tablespoon of butter and let it melt, then place the diced onion in there to cook for about 5 minutes. Next add in the diced green chiles (mild or hot, whatever your preference) and stir to combine. Dump in the shredded chicken and stir to combine again. And you’re done with the filling – see, super easy!

How to Assemble Cheesy Chicken Enchiladas

Assembly is just as easy, I promise. To start, I like to separate the filling into four equal piles in the pan. Each pile will be for two tortillas. This way I’m not left with a really large (or really small) pile of filling at the end. The picture below shows what I mean (though it only shows three piles – the fourth I had already put in tortillas). 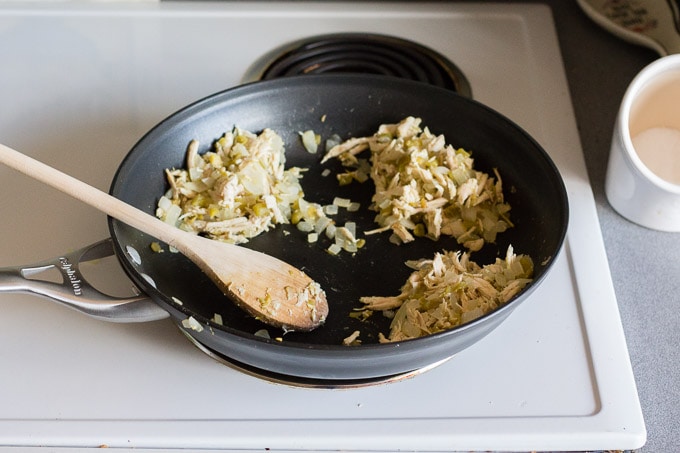 For this recipe I wouldn’t use corn tortillas – they tend to get mushy when baked with enchilada sauce in them. Instead I like to use Siete almound flour tortillas. They are pricey, but I think they taste great and hold up well. I have made this recipe with other types of gluten free tortillas and it still works, so if you have a different favorite feel free to use that.

When working with gluten free (and particularly grain free) tortillas, I’ve found that they hold up much better and are more pliable when they’re warmed. Wrap a damp towel around the pile of tortillas and put them in the microwave for about 15 seconds. Just enough so that they’re warmed through. Now back to the rest of the recipe.

Then take the 9×13 baking dish and place a tortilla up against one end of it. Put the filling into it and kind of spread it into a line. Next measure out the enchilada sauce and pour it in a line on top of the filling. Do the same with the shredded cheese – about one tablespoon (a large pinch) and sprinkle it in a line.

Continue this process until all 8 tortillas are filled with all of the filling. Once that’s done, pour the remaining enchilada sauce over the tortillas and spread it around a bit with the measuring spoon (see middle picture below). Then sprinkle the rest of the cheese in an even layer on top of the tortillas, cover with aluminum foil and place in the oven for 20 minutes.

When the timer goes off, remove and discard the aluminum foil, then put the dish back in the oven for 5 to 10 minutes, until the cheese is bubbly and browning on the edges. Let the food cool for about 5 minutes before serving, then dig in! 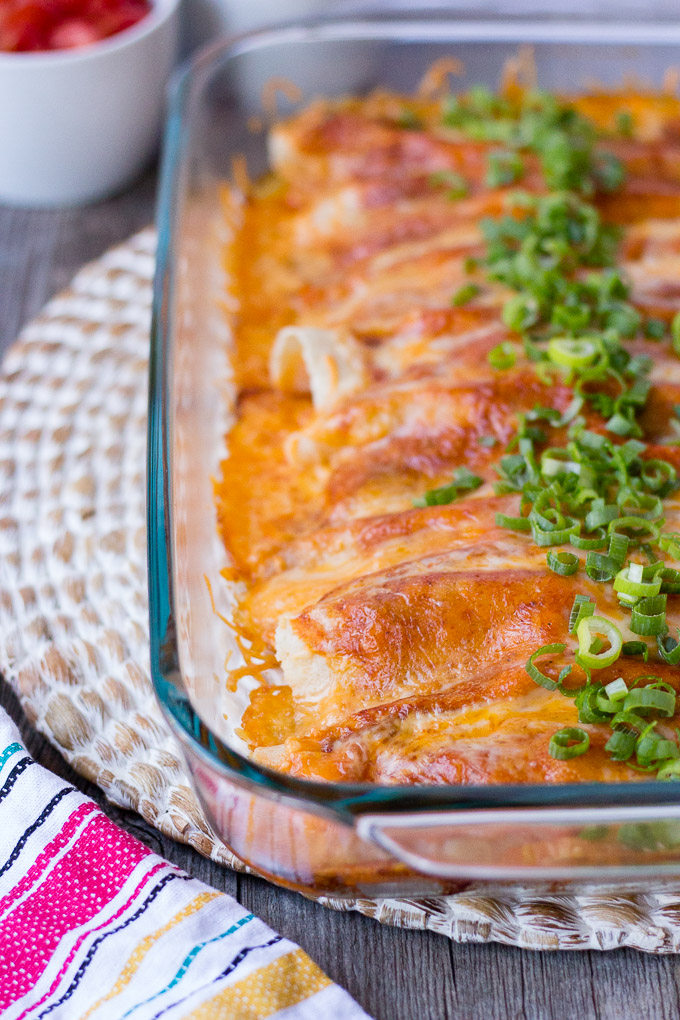 If you try out this Gluten Free Cheesy Chicken Enchiladas recipe (or any other recipe) then don’t forget to rate the recipe and let me know how it went in the comments below. Seriously, I love hearing from you!

If you’re after more gluten free dinner ideas (and who’s not), then try these recipes out too:

Don’t forget to get a fun drink to go with these enchiladas! Try one of these: 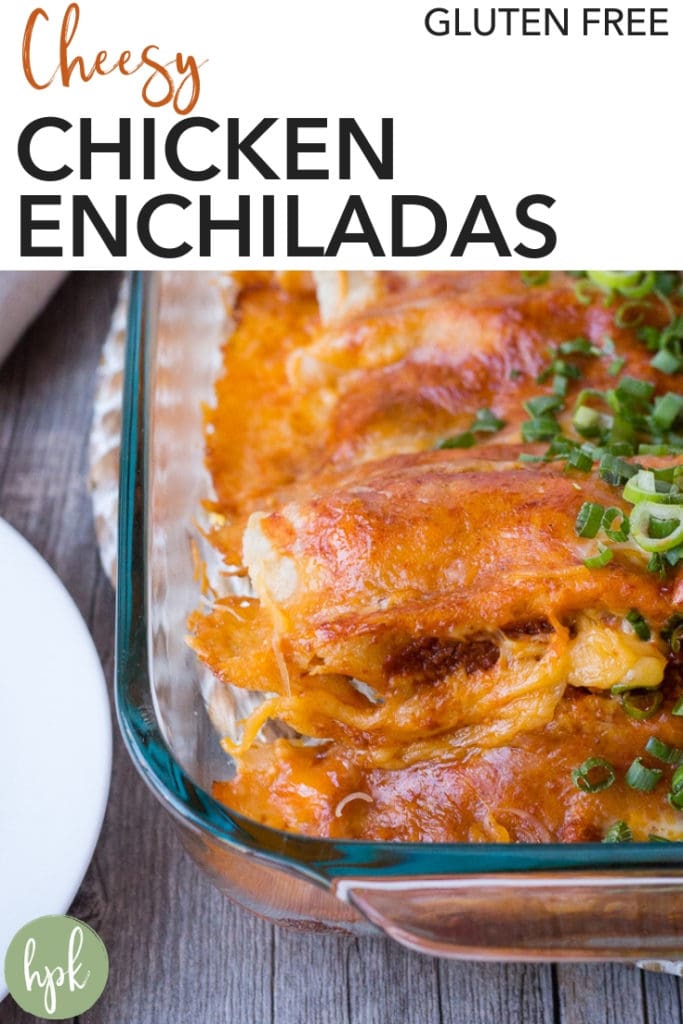 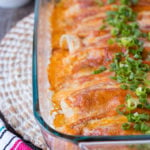