This Bacon Fried Rice is a gluten free comfort food, made slightly healthy with the addition of veggies. It’s an easy recipe for family dinners, or put an egg on top and eat it for breakfast. 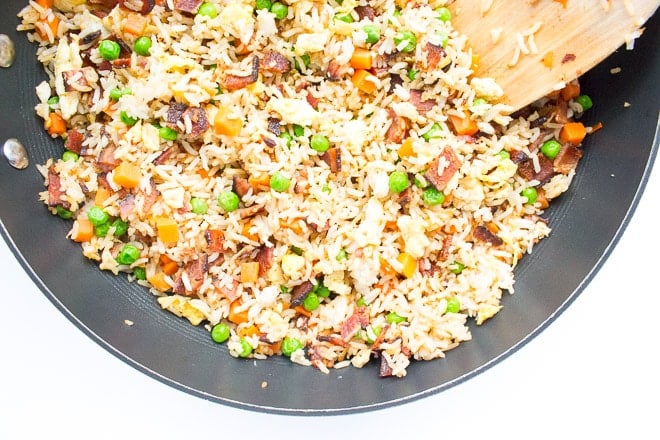 It is definitely December. The weather has gotten colder and the days have gotten (much) shorter. When it gets like this, I tend to fall back on my old stand-by recipes for dinners. Things that are tried and true, and easy. That’s where this Bacon Fried Rice comes in. My mom used to make a version of this when I was growing up and it was always a favorite. I mean, who doesn’t love bacon?

This version is similar to traditional fried rice, but a quick and dirty version. If you’re looking for something more similar to a takeout version, I found this resource that might be helpful.

How to Make Bacon Fried Rice

To make this Bacon Fried Rice, you’ll want to start by cooking the rice. I have a rice cooker that is actually my husband’s from before we were married. It cooks rice like a champ and I love that I don’t have to think about it once it’s turned on.

The next steps in this dish help keep the recipe pretty simple: cooking the bacon in the oven and using frozen veggies. First up – the bacon.

How to Cook Bacon in the Oven

Cooking bacon on the stove can be such a mess – all the grease splatters everywhere and I always get burned. Once I learned you can cook bacon in the oven, I was sold.

Start by lining a sheet pan with foil, then laying the bacon out in a single layer. Be careful not to overlap the bacon when you lay it out on the pan.  A little bit is okay, as the bacon will shrink as it cooks, but they shouldn’t be directly on top of each other. It should look like the picture below. 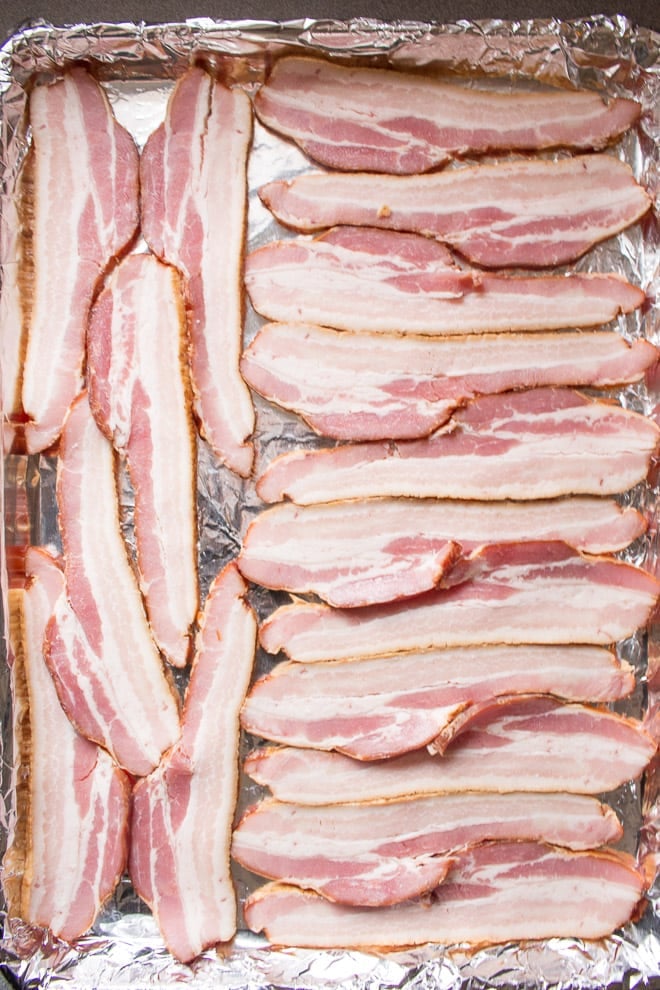 After 30-40 minutes (depending on your oven), you have crisp, perfectly cooked bacon. You may want to flip it after 20 or so minutes, to make sure both sides get browned. And be careful to watch it in that last 5 -10 minutes as it can burn easily. Keep an eye out and you will be rewarded with delicious bacon. 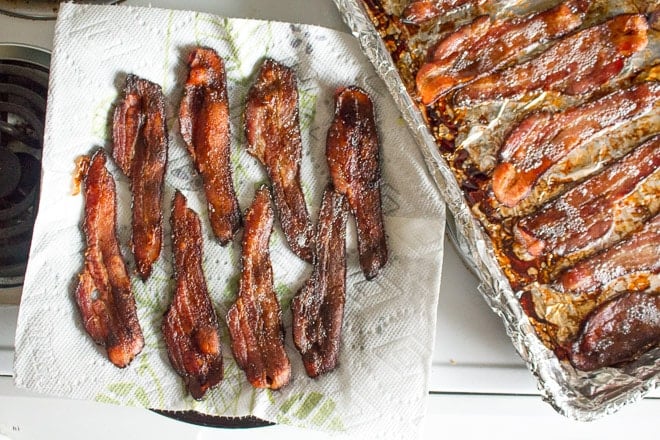 Next you’ll put the bacon on a towel lined plate, then drain the fat from the pan. I remove the foil (or parchment paper), then drain it off in a cup to save for cooking later. You can also just drain the fat into the garbage, if having a cup of fat around grosses you out.

Then comes the veggies. You’ll want to cook them similar to the package directions, except you want to undercook them by 1 minute. For the veggies I typically use, it calls for 6-8 minutes of cooking time and I do around 5 minutes. The veggies will continue cooking once everything is combined in one pan. Be sure and drain them! You don’t want the extra water making your rice soggy.

Once the rice is done cooking, you’ll want it to cool off a bit. This is where the drained bacon pan comes in. I typically spread the rice out on the pan that has a little bacon grease in it. This gets some of the bacon flavor onto the rice without pouring all the grease into the dish.

The bacon will have cooled a bit by now and you can chop it up into smaller pieces. I usually halve it length-wise, then chop it up from there. 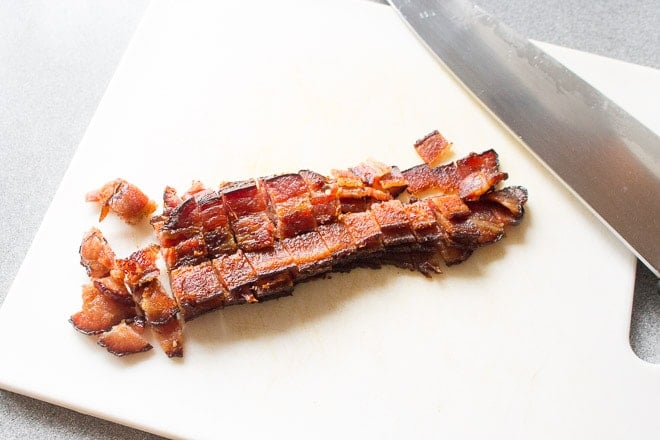 Next you’ll heat oil (or bacon grease!) in a large pan and scramble the eggs in it. After they’re cooked, combine everything into the large pan, mix it together and heat it through. 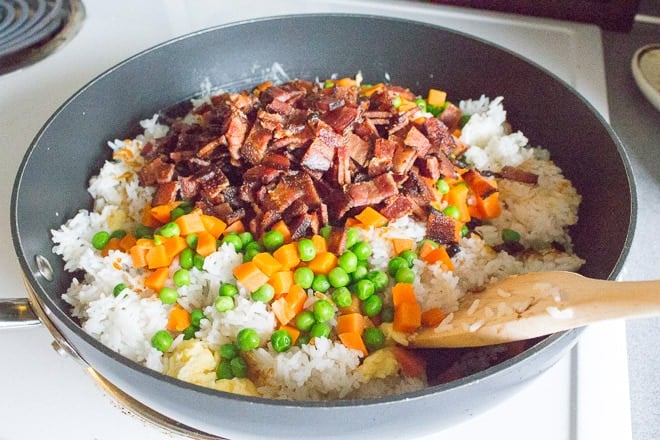 Add in the gluten free tamari sauce and you’re good to go! 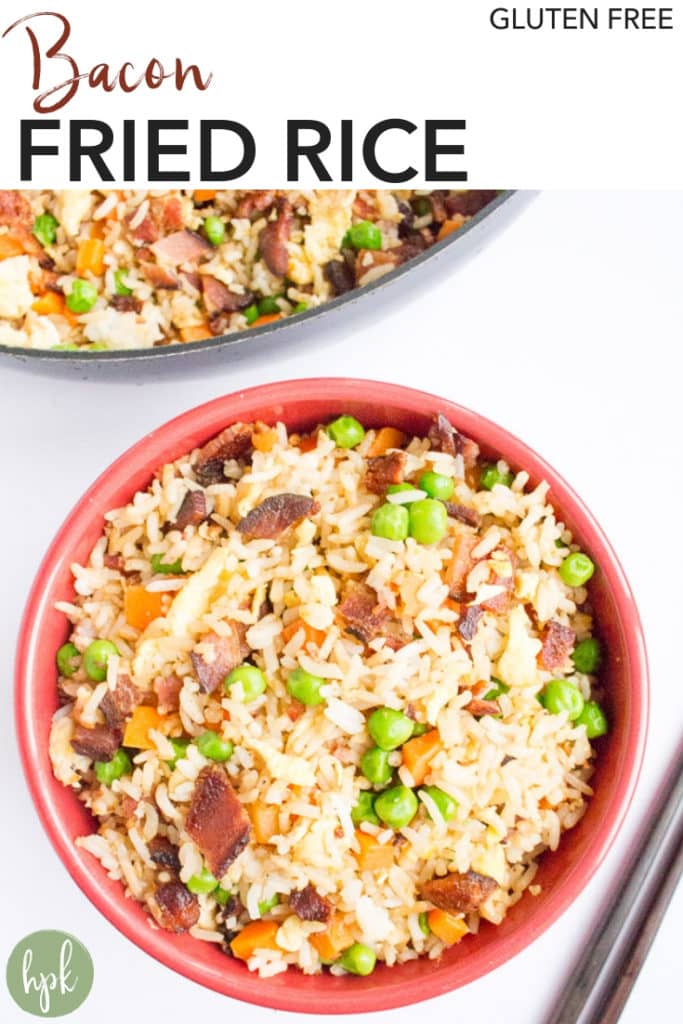 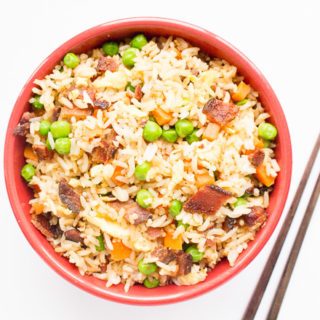 - Keep an eye on the bacon in the last 5 to 10 minutes of cooking as it can burn easily.
- If you’re looking for less sodium, use low-sodium bacon and one tablespoon of tamari sauce instead of two.
- You can use other frozen vegetables besides only peas and carrots. Just be sure to slightly undercook them before adding everything together.